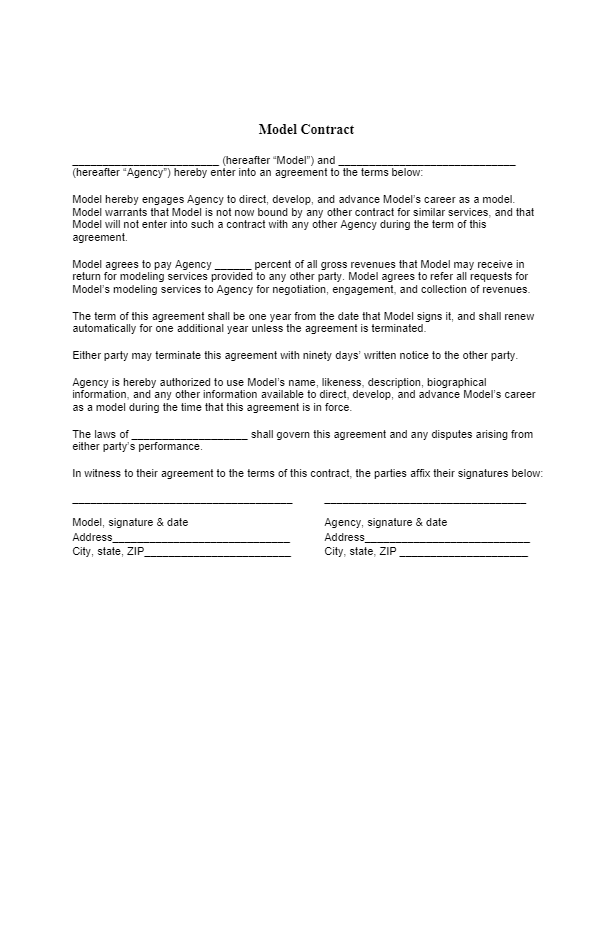 Here's What You'll Find in the Model Contract:
Download template Use template

Are you a model yourself or a business seeking to hire a model? In either case, you will have to enter into a contract with the other party, known as a model contract. Here is all that you need to know about the model contract.

What Is The Model Contract?

A model contract is a legal agreement between two parties, namely the modelling agency and a model. Usually, a model is not hired directly but through a modeling agency wherein the model doesn’t act as an employee of the agency but an independent contractor.

Models choose to bind themselves with a modeling agency to find projects to work on as modeling agencies best know which client/company is to be trusted.

When Is A Model Contract Used?

A model contract is used when a model joins a modeling agency in search of modeling projects/jobs.

What Is Covered In A Model Contract?

A model contract includes the full details of the model including his or her full name, address, email, signature, and other necessary info.

It also includes a clause whereby the model gives the right to the modeling agency/client to use the photographs under his or her name.

Typically, a model contract also contains copyright and penalty clauses as being decided by both parties to avoid any discrepancies later on.

There are various types of modeling contracts that a model or a modeling agency can enter into:

An exclusive model contract states that a model is only allowed to represent a single modeling agency. The model is hereby not allowed to enter into a contract with any other modeling agency without any prior permission granted from the mother agency.

The model contract is usually entered into by novice models that have just started their career in modeling. A mother agency is thus responsible for building a smart portfolio of the model and makes them learn better about the modeling industry. These mother agencies work on a small scale but help their models to transfer into big modeling agencies.

As the name suggests, this model contract is made for a limited period which may be a single job or single-season.

As you can see, a model contract is necessary to document the terms and conditions of the agreement. If you are looking for model contract templates for any reason whatsoever, CocoSign is here to ease your worries. It provides a wide variety of ready to use model contract samples you can choose from. Get started now!