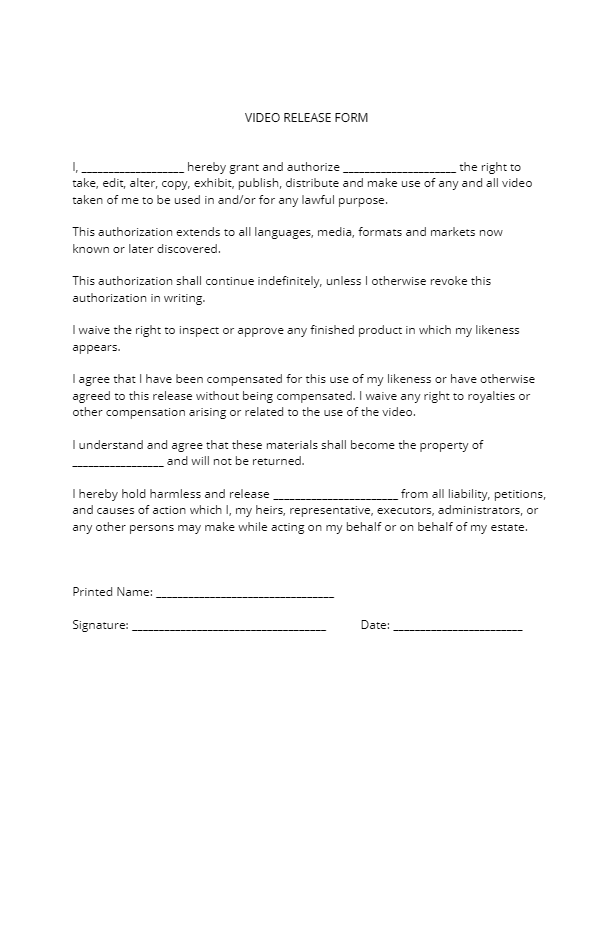 Here's What You'll Find in the Video Release Form:
Download template Use template

If you are in the entertainment business as an actor, producer, singer or a supporting actor, you may risk your payment and credibility without a formal contract.

Actors, media persons, people in the news industry, digital marketing, content and internet advertising usually find great use of this media release form to protect their payment rights and avoid misuse of the content centered around them.

What Is A Video Release Form?

A video release form is a formal and legal document between a producer and the subject in the video or a producer and a singer. It allows a third party usually the company to purchase the video rights to use the appearance of a subject (a person, an owned property, place etc...) including video, images and audio for the benefits of the third party in various ways for a mutually agreed price.

It is an important formal document and must be always used by producers when they hire someone to cast in a video. It’s also useful for actors, models, pet owners, commercial property owners and people who give guest appearances.

In this digital age, anyone can quickly become famous and infamous. With a formal and signed contract, either party can limit his or her liability and usage of the video or portions of it for intended use only.

A simple video release form allows the producers to use the video, still and audio for promotional, advertising and information dissipation purposes as agreed upon in the contract with the other party for a specified duration, channel and mediums. Without a formal contract, you cannot have a say in the manner in which the video or its contents are being used.

The usage of the content of the video may include use for TV or online, radio, magazines, banner ads, advertising display or any type of publication. Usually, video release form agreement templates are available online in the form of a draft contract that are easy to use.

You can simply download the media release form, read it, add your expectations and limits on usage, sign it and send it to the other parties to sign in person or digitally.

Always sign a video release form or media release form before you start work. Once the work has started, you cannot complain about issues like underpay or unsatisfying work conditions.

In the case of producers, they cannot hold an actor responsible if he or she turns up late for work, throws starry tantrums or generally acts in an un-cooperative manner.

Why do I Need a Video Release Form?

Having a signed video and interview release form ensures that your videos, stills and audio clips are not being misused anywhere. It maintains discipline for the entire duration of the shoot and ensures everything gets done peacefully, on time and within the budget.

With the stated provisions in the video release contract, the producer and actor are protected against unforeseen events, natural occurrences and other kinds of delays.

The video release form also safeguards the producer or the buyer from payment allegations and unauthorised usage claims later. The compensation for the video being authorized for third party usage is limited to the amount agreed upon and signed in the document.

The video release form agreement legally protects both the producer/ buyer and the person whose video is allowed for third party usage. That is why a video release form signed is a must when you are buying or selling a video regardless of the video length and payment amount.

Even if you are a third party buying the video but not the producer or the actor, you should always formally purchase a video from the seller using a video release form to limit his/her claim on content usage later on your platforms.

What Does a Video Release Form Cover?

The video release form can be used for one or more videos, or a combination of videos, audio and images on more than one platform, media, channel or for personal purposes.

When to Use A Video Release form?

It is necessary to establish a clear agreement between the subject of the video and the producers/ buyers of the video. This can only be achieved through a legally binding video release form agreement to avoid any unwarranted legal trouble later.

To simplify this process and safeguard your interest, CocoSign provides a range of carefully drafted video release form contract templates for your video needs.

They are intuitive, easy to use and modify. Equipped with a range of video release forms for both producers and actors, you can easily modify your contract and get it signed from the other party.