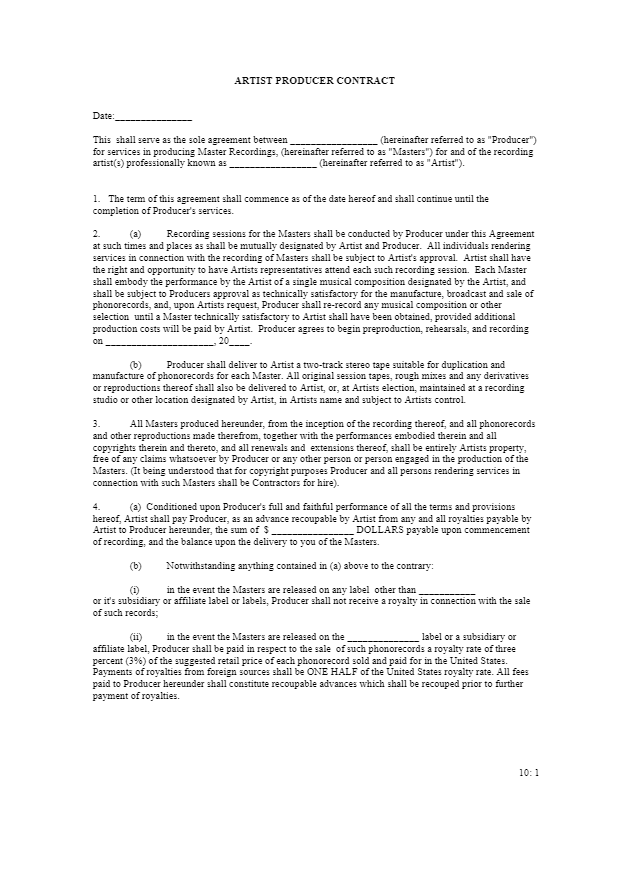 Here's What You'll Find in the Music Producer Contract:
Use template

A single track is a result of the hard work of a range of parties – lyricist, singer, musician, producer, and more. This explains why it is important to establish a music producer contract to protect the rights and duties of each of the parties involved.

What is a Music Producer Contract

A music producer contract is a legally binding agreement signed between two parties, namely, the artist and the producer. The contract defines the terms of the relationship between the two parties, while also underlining the rights of each party. It also talks about payment, responsibilities, along with other crucial information.

The music producer contract is governed and interpreted in accordance with the laws of the country the parties reside in.

Why Is a Music Producer Contract Necessary?

As the industry of content production is growing at a rapid rate, new music is launched way too often. With the rise of digital media, the music industry has not only become sophisticated but edgy too.

In such a competitive environment, it gets difficult to exercise the rights on the produced music, and this is when music producer contracts come to the rescue. Music producer agreements are often used by production companies, producers, and music engineers to contract with a record label, an artist, or other music companies.

What Should Be Included In A Music Producer Contract?

State the payment of the producer clearly in the contract. You can either choose to go with pay per hour or pay per song model. Whatever model you choose to go with, along with the amount charged, should be mentioned in the agreement to avoid misinterpretation.

In addition to producing your music, what are the other roles do you expect your producer to fulfill? Both parties must agree on the specific roles and enlist them on your contract. This will help you prevent any legal complications, and would also keep both the parties on the same page.

In an event when your producer also happens to be the writer of your song, it is recommended to get the rights to the songs and compositions transferred to your name.

Different stages of music production involve different types of agreements. In this section, we will discuss the most commonly used music producer contracts you should know about:

This is one of the most basic music producer contracts. Supposedly, you along with two other singers sing a song, produced by XYZ. Now, if XYZ doesn’t sign a contract, you, as well as other two artists, could claim rights to the ownership of the track.

This agreement is signed between the artists and the producer and documents the fact that producer has entered into a strategic relationship to produce a song track, and that the artists will be paid for the agreed percentage share.

This agreement is signed between the side artists and the producer to demonstrate that they have been engaged in the process.

So, are you ready to draft your own music contract template but not sure from where to start? Just look upon CocoSign and sort all your needs related to legal contracts and agreements. Simply browse through their vast library of templates, and choose the one that fits you the most.