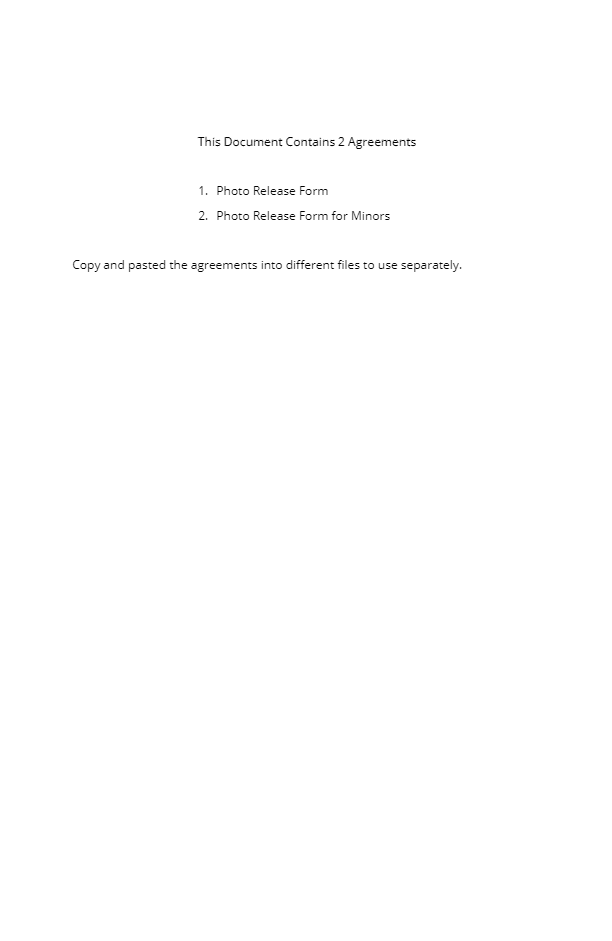 Here's What You'll Find in the Photo Release Form:
Download template Use template

Looking to create a photo release form yet having no clue about it? Struggling to find a proper template that works in your favor?

Part 1: What Is A Photo Release Form?

Under the contract, the releasor is to authorize the releasee to use photographs for commercial or personal purposes in exchange for payment, royalties or benefits in other forms.

A release form ensures no grey areas when it comes to using images.

Part 2: When Do You Need a Photo Release Form?

An image release form is required when the image will be utilized for commercial purposes, such as raking in money, promotion of services, or publication.

Without a photo release form, the individual or the owner of the property in the image may stake his or her claim to the revenue it brings.

Also, a photo release form becomes necessary if the individual or subject in the image is highly recognizable.

In general, it is a good idea to have a photo release form signed for any picture you click as a commercial photographer, to always be on the safe side.

There are many types of photo release forms that vary in details, suitable for different scenarios, including:

As a catch-all term for all types of release forms, the photo release form describes the relationship between the photographer and the client or the model. It details how the photos can be used and who will own the final work of photography.

It may also specify whether or not the photographer is granted the consent to use the pictures in his or her portfolio, if the client claims the ownership of the above-mentioned pictures.

Without a print release form signed with the photographer, it may constitute a violation of law for the client to print out those photos.

This type of release form is optional, dependable on the what are the images intended for, like to be included in a company brochure or to be posted in an e-commerce website.

This type of photo release form can only be valid when it is signed by the parent or guardian of the minor.

A photo copyright release form refers to a legally enforceable document that transfers all the rights of certain pictures from their owner to the client or publisher, authorizing the latter to copy, distribute, or use those pics for other purposes.

This type of release is often signed when it comes to non reusable photos such as branding product photo shoots or anything that may not bring the photo owner any extra benefits in the long term.

Part 4: What Should be Included In A Photography Release Form?

The common inclusions in a photo release form are:

Identification of the Photographer, the Model or Client:

A photo release shall include a detailed description of the photo, likeness, or video covered within.

How long the photographer, business, or individual will retain the right to use the photo, likeness, or video

Rights to the Final Work:

Consideration for the Model or Property Owner:

The photo release form may specify if the model or property owner is signing over his or her rights to the image, likeness, or video; or if there is any sort of payment being made to the model or the owner of the property in the photo to obtain the release, as well as the type of payment and the amount of payment. Whether the model shall receive royalties shall be explained also.

Now you know all about photo release forms, who uses them, and why they are necessary. Time to personalize your own photo release at CocoSign!