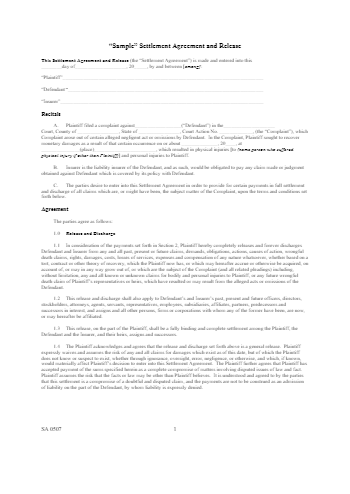 Here's What You'll Find in the Settlement Agreement:
Download template Use template

No one can be trusted these days with their words. Most of the people tend to fall back on their promises. Some even try to make changes to already made agreements for their benefit. Given all this, a settlement agreement is necessary and warranted.

The legal framework is more complex than anything else in the world. In light of that, one always needs to know a proper settlement agreement format. But the question is, why would anyone need it unless required? You will find out the answer by reading the following sections.

What Is a Settlement Agreement?

In case of preparing a settlement agreement, all the parties put down their signatures against the points to which they have agreed.

Often settlement agreements are stroked between employers and employees when the employer fails to adhere to labor laws. In that case, the employer agrees with the employee to avoid tedious court proceedings that might be expensive and take up a lot of time.

Who Needs a Settlement Agreement?

The basis of a settlement agreement between two parties or individuals is that one of them does not wish to take it to court. Court proceedings usually take a lot of time, and there’s also a great number of court fees and the lawyer’s bill needed to pay.

Settlement agreements can be set between two entrepreneurs who are in dispute with each other over a business plan that both of them claim to be their intellectual property.

What Are Included in a Settlement Agreement?

This might consist of the initial steps that were taken, the charges that might have been instituted, and the allegations that might have cropped up on the part of either the individuals or concerned parties.

Both the parties also forgo the option of taking it up in the near or distant future and agree not to make any further claims with regards to the matter. This is followed by the amount of money that either of the party is necessitated to disburse

About this, the concerned party promises to make the transactions within the agreed timeframe.

Settlement agreements recently turn into a necessity, and most people will need it with the number of people breaking their promises at the passing of every hour.

Since most people won’t be able to afford a lawyer or take the help of a public attorney, having a settlement agreement is the best solution to dispute resolution outside court without wasting time and energy.

If you are looking for settlement agreement templates, you can visit the official website of CocoSign. We provide excellent templates and formats for all kinds of agreements.