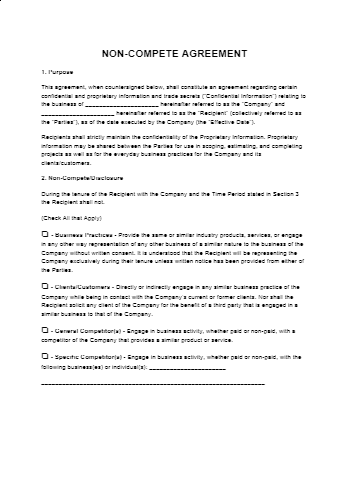 Here's What You'll Find in the Non-Compete Agreement:
Download template Use template

Non compete agreement is an extensively used agreement in the corporate field where competition runs high and the companies are fighting shoulder to shoulder to keep their edge over their competitors.

Read this detailed article if you have a query related to a non-compete agreement such as where it comes from, what it means, and how it can be applied. The article explains in detail the ins and outs of the non compete agreement and its intricacies as well.

What Is a Non Compete Agreement?

Non compete agreement is an important tool used by the companies to protect their interests against the competition. It is essential for protecting the interests of a company, even when the employee or service provider has completed the terms.

It is basically a pact between a company and a representative where the representative is asked and held liable by law. This guides two parties to not act in a way that is deemed as competitiveness against the company.

Also, it protects the interests of the company from being held in danger by the representative after their term of working with the company is essentially over.

Non compete agreement is used in circumstances after the company and the representative have closed their working contract and their term with it.

In simple words, the representative is asked to refrain from competing against the company after their term of working has come to an end.

Why Employers Use a Non Compete Agreement?

This information is often sensitive and can be used by the competitors to wrongfully take advantage of leading the market. It can become a usual practice for people to get a higher salary, a notable position.

In order to stop this trading of information between representatives and the companies, such a non compete agreement is put into place. Hence, the agreement works to safeguard the interests of a company.

What Are Included in a Non-Compete Agreement?

The non compete agreement has several aspects that the involved parties must carefully go-through before forming an agreement. The agreement is formed by experts in legal documentation. It is advisable for both parties to keep the following things into consideration:

Considerations And Obligations for the Employee

Following considerations are kept in perspective for the representative while forming the agreement:

How Can You Get a Free Non-Compete Agreement?

Cocosign is an easy-to-use online platform with a wonderful legal consultancy option. It should be your go-to platform for any legal issue that you might encounter in your business documentation. Grab your free non-compete agreement template now!

When an employee joins a company, he is often given additional information about the production, price, and other miscellaneous information of the products of the company.

This information is often sensitive and can be used by the competitors to wrongfully take advantage of leading the market. The non-compete agreement is used by corporations in order to bind a representative and safeguard their interests in the future after the working term with a representative is over.