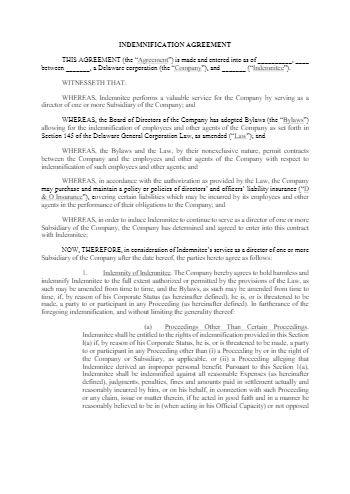 Here's What You'll Find in the Indemnification Agreement:
Download template Use template

Indemnification Agreement binds two parties in a two-way relationship that allows them to depend on each other. If you are thinking of forming a partnership with another entity but worried about the potential damage, indemnity agreement might be the right thing for you.

What Is an Indemnification Agreement?

An “Indemnity” is a security or form of protection against an unforeseen liability.

An indemnity agreement is written between two parties which absolves a party from its actions and appoints the other party to compensate for the prior party’s actions whilst the prior also provides the latter with some lesser degree of revenue on a periodic basis.

This means that rather than having to bear the consequences of a loss and take responsibility to fulfill the legal obligations to compensate for any damages caused in the wake of such actions, an indemnity agreement holds you as ‘harmless’ i.e., not responsible/liable for the consequences of your actions.

It instead shifts the responsibility to pay for the damages onto another party provided certain conditions and clauses of the indemnity agreement have been met. These clauses are previously agreed upon by both parties and are a legal agreement between the both of them.

It is important to note that both parties have duties to each other under such an agreement. The most common and easy to understand example of indemnity agreements is an insurance agreement between two parties.

What Types of Business Would Use an Indemnity Agreement?

The following businesses to use indemnity agreement extensively are as follows:

What Are the Typical Parts of an Indemnity Agreement?

The agreement may detail consideration, which is usually monetary in nature, and will be used to render the agreement as official. The agreement will state-specific clauses under which the indemnitee will not be held liable. This involves legal jargon and terminologies.

Exclusions to the agreement are also described in the indemnity agreement. Such a case usually occurs when there is sufficient evidence of negligence on the part of the indemnitee.

This means, if the indemnitee is proven to be negligent, the agreement doesn't hold and the former can be taken to court. The method to set forth claims is also detailed, including the timings of the claim and its limits.

Furthermore, the agreement will state who is responsible to bring proof of either validating or rejecting the claim. These are the typical parts of an indemnity agreement.

The indemnity agreement isn’t as simple as it seems in theory. It is not a wonder clause or agreement that relieves a certain party from all of its legal obligations and invariably places the burden back on the shoulders of the other organization.

The legal language alone should be carefully treated and read so as to not cause miscommunication or legal mistakes. The agreement, if made properly, does not make one part dominant over the other. So how can you carefully maneuver your way around this conundrum?

The indemnity agreement brings two or more parties onto a single page and relieves one party of the legal consequences that they might face in certain cases. It helps the parties form a two-way relationship that helps them adapt better to the legal conditions.

CocoSign could be your go-to platform for all your legal requirements. They are the best legal advisors in the business. You can get your free indemnity agreement template on CocoSign.