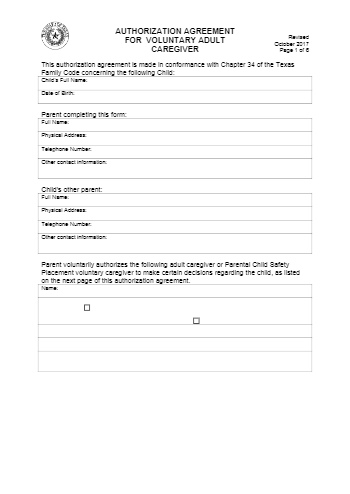 A resident of Texas who is going to be away outside the state for a long time is afforded the convenience of appointing a relative a close friend to resume parental duties over his/her minor child. The individual nominated to act as a guardian will be responsible for making medical decisions, among others on behalf of the parent for the minor child. And this document is named as Texas Minor Child Power of Attorney, a certain type of power of attorney in Texas.

This article explains in detail what a power of attorney child Texas is and when to use it.

What is The Texas Minor Child Power of Attorney?

The Texas power of attorney for minor child(ren) is a legal instrument citizens of the state can use to temporarily nominate an individual to act on their behalf as far as their minor child(ren) is concerned. The one who grants these powers is the principal while the other party who assumes guardian responsibilities over the minor is called the agent.

In general, the time of execution and date of expiration is clearly stated on the form.

When to Use a Texas Minor Child Power of Attorney?

The Texas temporary guardianship form is usually used by parents when they know they are going to be absent for a considerably long time. A parent can choose to fill the power of attorney form, and sign under the provisions of the law to get it ready for the time when they might need it.

Usually, Texas citizens should consider drafting one when they are;

Should the principals want their agents to assume guardianship powers only after they become incapacitated, a Texas power of attorney for children shouldn’t be used. The official form prescribed by the state for this purpose is a Texas Declaration of Appointment of Guardian for Children form, which is executed according to the dictates of § 1104.153 of the Texas Estates Code.

The parent is also allowed to state particular permissions and restrictions of the powers of the agent in the form before it is notarized.

Once notarized and completely executed, the agent is allowed to make all decisions concerning the minor child for up to one year.

The signing requirements include that the form is:

Are you leaving Texas for a long while and need someone to assume guardianship duties over your child, yet, don’t know how to begin? Getting a Texas power of attorney for child custody or temporary guardianship form is a good place to start. You can find several of these on CocoSign and download one for free.