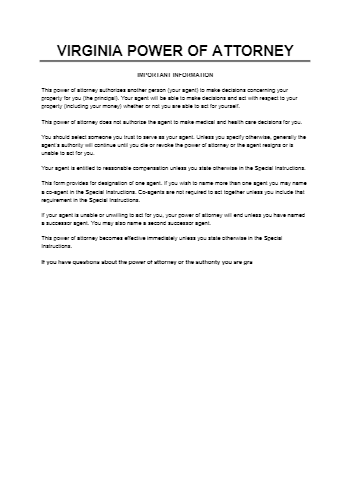 Here's What You'll Find in Power of Attorney Virginia:
Download template Use template

A power of attorney Virginia form is crucial for many businesses and organizations inVirginia. Such a form ensures that the institution continues to function even when the people running the company are not available to run it.

Not only in companies, a power of attorney or POA is also used within families for personal management. In a state like Virginia, it is even more important given the fact that Virginia has adopted the Uniform Power of Attorney Act.

What is a Virginia Power of Attorney?

A Virginia power of attorney form is a legal document that is used to authorize a person (known as the agent) in Virginia to work on behalf of the person-in-charge (known as the principal) in his or her absence.

Each state has its own Power of Attorney laws and requirements. The agent, also referred to as the “Attorney-in-fact,” can handle the day to day operations without anyone’s control or administration.

The document needs to follow a particular format for it to be recognized. A power of attorney form Virginia is often accompanied by a Power of Attorney Revocation Form, which is used to revoke the authorization granted to the agent if the terms and conditions are breached. Also, POA forms vary depending on their types (more on that later).

How Does the Virginia Power of Attorney Work?

A power of attorney in Virginia is covered under the Uniform Power of Attorney Act, Va Code § 65.2-1600 et seq.

This states that a “Power of Attorney” means a writing or similar record that is issued by a principal to authorize an agent to work during his/her absence. Thus, such a transfer of authority is only recognized when it’s in written form.

The document covers all the terms and conditions, scenarios where the POA will be and will not be applicable, and duties of the agent. Once issued, the agent is then liable to carry out the duties respectfully assigned to him.

The power stays with the agent until the time frame mentioned in the POA document. Or, it is automatically revoked if the agent commits something outside his/her scope of duties, and the stakeholders find it detrimental to the institution.

The agent also has the power to resign from the position and get out of the POA obligation. This is stated under § 64.2-1616. Agent's resignation; notice.

Types of Virginia Power of Attorney

The principal can issue various types of power of attorney forms. The Virginia state law allows the use of different types of POA forms depending upon the authority to be granted. This is covered under Article 2 of the Uniform Power of Attorney Act.

Some common types of Power of Attorney forms issued in Virginia are:

Also known as “Limited Power of Authority,” this is the most common POA form issued. This allows you to create your own set of conditions and duties as per your needs. With Conventional POA, you need to be explicit, precise, and specific.

Unlike Conventional POA, which is limited, a durable POA is issued for a lifetime. So the agent is expected to perform the duties unless the POA is revoked or resignation is put in place.

Springing POAs are issued, but don't come into effect immediately. Only a set of conditions mentioned in the form can trigger it. Before this, the agent remains powerless.

These are durable and used for healthcare purposes. Usually, when the principal suffers a medical condition that makes him/her unavailable, medical power of attorney Virginia is triggered.

Parental POA is used to authorize children to carry out tasks in the absence of their parents in Virginia.

Why is the Virginia Power of Attorney Important?

The power of attorney forms are important because they ensure the process and workflow are not clogged because of someone’s inavailability. For companies, this can result in thousands, if not millions in losses.

Since Virginia State law only recognizes a document in written format for power or authority transfer, the agent might face rejection if he/she has no such documents to represent someone else’s interests in Virginia. In this world full of uncertainties, it’s wise to get the Power of Attorney form created sooner rather than later.

To issue a power of attorney form, you need to meet the requirements. Some of them are:

The POA document should strictly follow a proper format and be compliant with the Uniform Power of Attorney Act.

Capacity and soundness of mind of the agent

The agent undertaking the authority should have a sound mind to carry out the duties.

At least a few people need to be present when the POA is being created. They should sign at respective places as witnesses.

To create a legally-binding POA in a short amount of time, you can use pre-existing Virginia power of attorney form templates provided by CocoSign. Download, edit, and use those documents for your specific purposes.