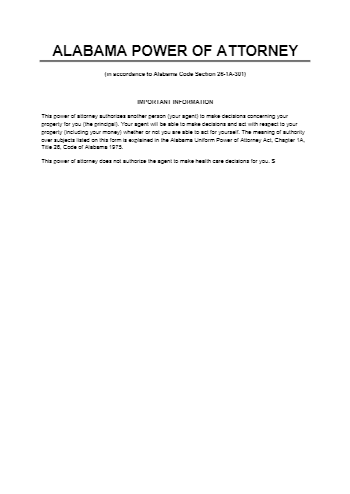 Here's What You'll Find in Power of Attorney Alabama:
Download template Use template

The power of attorney form is a document through which an individual (principal) can nominate another (agent) to represent them and act in their name in legal, financial, business and real estate transactions when they are absent or incapacitated and can no longer take decisions on their own.

Citizens of Alabama are allowed to exercise these powers as prescribed by the laws of the state. In this article, a lot more about the Alabama power of attorney will be discussed.

What is an Alabama Power of Attorney?

The power of attorney Alabama is exercisable according to the contents of Title 26, Chapter 1A of the Uniform Power of Attorney Act.

How Does The Alabama Power of Attorney Work?

Regardless of where the Alabama power of attorney form is picked up from, the agreement between the principal and the agent is legally binding if the following requirements are met:

A power of attorney form Alabama might be used by anyone who needs an agent to represent them for:

Types of Alabama Power of Attorney

In Alabama, a general power of attorney form is used to grant an agent powers only over the finances of the principal.

Using this form, a principal may grant powers to act on their behalf in all matters or specific matters beyond when they become incapacitated. There are two types of durable power of attorney in Alabama namely a general one and another for healthcare (medical power of attorney Alabama).

This form is used by a principal to allow a relative or friend to act as the guardian for their minor child for a period, usually not more than one year.

This form can be used to allow an attorney-in-fact act on behalf of the principal in matters relating to tax submissions.

Formerly known as the MVT 5-13 form, this form allows an agent to handle all matters relating to the principal’s vehicle with the Alabama Motor Vehicle Division.

Why Is the Alabama Power of Attorney Important?

An Alabama power of attorney is important for the following reasons:

Asides signing in the presence of a notary public or at least one witness, there are other requirements to be met for an Alabama power of attorney to be valid. One such is the age. Unlike other states in the US, an individual is not legally an adult until they have attained age 19. Hence, both principal and agent must be at least 19 years old.

Are you looking to draft an Alabama power of attorney form but have come across only general forms that do not reflect that they are customized for Alabama alone? Stress no more. CocoSign has several Alabama eforms you can download for free.