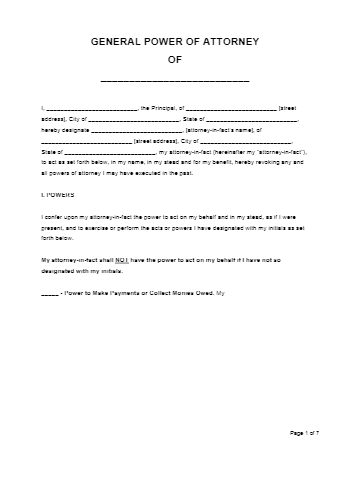 Here's What You'll Find in General Power of Attorney:
Download template Use template

For years, wills have been the most respected legal document by seniors and every adult who intends leaving properties behind for their dependents. This is because it defines who takes what when they are gone.

How about who handles your financial and legal matters when you are alive but absent? Here’s where a general power of attorney comes in. To find out more about this unique document, key considerations to make while drafting one and how you can get one, read further.

What is General Power of Attorney?

A general power of attorney, as we know it, is a legal document that gives an individual the legal permission and powers to act on another’s behalf and in his/her name in all affairs. This law is governed by the contents of section 10 of the Power Attorney Act 1971.

The one who nominates another to act on his/her behalf is known as the principal while the nominated fellow is described as the attorney-in-fact or an agent. It is called general because this power of attorney gives the agent the powers to act on behalf of the principal in managing all their legal and financial matters.

This may include the buying and selling of different assets for the principals, handling their tax-related matters, receiving their benefits and even spending money on their behalf.

Unless explicitly described as a general durable power of attorney, with the keyword being ‘durable’, a general power of attorney becomes invalid as soon as the principal becomes incapacitated mentally or physically, and is unable to make certain decisions for him/herself.

This is the major difference between these two types of power of attorney:

Unlike a durable power of attorney (poa), a general poa becomes ineffective as soon as the principal becomes incapacitated or mentally unstable to make decisions for theirselves. In contrast, a durable poa still remains valid even when the principals can no longer make the right judgement on certain decisions due to illnesses like dementia, or any other health issue that affects their sense of reasoning.

How Does A General Power of Attorney Work?

In general, a general power of attorney should take effect from the day it is signed and executed under the provisions of the Powers of Attorney Act and associated Regulations.

There are several considerations a principal should make before drafting a general power of attorney form. One such is who your agent would be.

The principals should appoint only that individual, or several individuals who they feel comfortable with and trust will represent their best interest. This agent must be over the age of 18. In other words, a principal cannot appoint a next of kin, son or daughter who is still below the legal age in most states.

Since an agent has the powers to mismanage the finances of the principal and put the principal’s business in jeopardy, care must be taken in selecting this attorney-in-fact. However, the principal can choose to sack his/her agent anytime deemed fit. Perhaps, most importantly, there is no need to give any legal reasons to do so.

Principals also have the power to limit the power of their agents to checkmate their excesses. Take, for example, the principals can limit the agents to handling their real estate transactions only when they are out of town or the country. The principal can as well stipulate in the power of attorney document that the agent only represents him/her in different capacities within a time interval.

How to Get A General Power of Attorney?

Choose an agent. This individual according to the content of the general power of attorney document is allowed to represent the principal on all legal and financial matters. Henx, the powers of the agent should be clearly discussed.

In some states, you are allowed to appoint a secondary successor or an alternative agent who stands for the agent in their absence. Note that should the agents not be in agreement, a general power of attorney form does not allow agents to co-decide on matters. It is therefore recommended you choose someone from your will that has your best interests at heart.

Depending on the state, a general power of attorney form allows the attorney-in-fact represent the principal only on certain issues like taxes, retirement plans, benefits, stocks and bonds, real property, personal property, insurance and annuities, claims and litigations, trusts, and gifts.

Before finalizing the contents of the document, a principal can also include a clause containing any special instructions they feel is necessary.

Finally, the principal and the agent, if applicable, is then expected to append signatures on the power of attorney document according to the laws of the state. However, these documents must be signed in the presence of the notary public or a number of witnesses.

In some states, the agent is also required by law to sign another document attached to the power of attorney form. This form is titled “Agent Certification”. This document profiles the rules the agent must obey in accordance with the procedures commanded by the laws of the state.