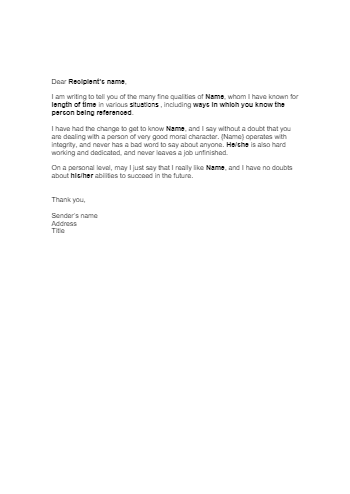 Here's What You'll Find in Character Reference Letter (for Court):
Use template

The defendant’s character can sometimes play an important part during a court trial, mostly when it’s a custody case or a minor offense. In these cases, the Court will consider a character reference letter as a testimony of that person’s character and morals.

The character letter is usually written by family members, friends, neighbors, or employers, people who have spent enough time with the defendant so that they can vouch for their character. By the way, Cocosign have different templates for other kinds of letters of recommendation.

While showing a person’s moral qualities doesn’t mean they will be entirely forgiven for breaking the law, in some cases, it can help get a reduced sentence, especially if they have no previous criminal activity.

What Is a Character Reference Letter for Court?

When the accused is on trial, the Court is interested in finding out who they are, in the context of the illegal activities they are accused of. They need to receive an accurate description from the people who know the accused the best.

It’s the lawyer’s job to provide that information, so they will ask family and close friends to write down their honest opinion of the accused. That’s what the character reference letter represents, honest and accurate testimony of the character and moral values of the person standing trial.

When Do You Need a Character Reference Letter?

The Court needs to establish the character of the accused, to determine whether the offense was an exception, a mistake that they are unlikely to repeat. That matters when it comes to sentencing.

So, they accept character reference letters from people close to the accused, to get an idea of what they are like in their everyday life. This usually happens during custody trials or drunk driving accusations.

Not only does the character letter underline that person’s moral qualities, but it also mentions the extent to which a harsh sentence will affect their lives; how their career and family will suffer from a conviction. A well-written character reference letter for Court can really lean the balance in favor of the accused.

What Should Be Included in a Character Reference Letter for Court?

The character reference letter is a straightforward document, usually one page long. It should be clearly written and to the point, mentioning the most critical aspects.

If you’re not sure how to write a character letter for Court, it’s best to look for character letters for court templates to help you draft your letter. Here are the main elements it should include:

If you are asked to write a character letter for Court, you must make sure you treat it with seriousness and attention. Be as honest and transparent as you can, but also concise. Your character reference letter can help reduce your friend’s sentence, so make sure it’s well-written.

The best way to create an efficient document is with character letters for court templates. The one created by CocoSign is very efficient. They also offer many other useful and user-friendly templates for all sorts of documents.