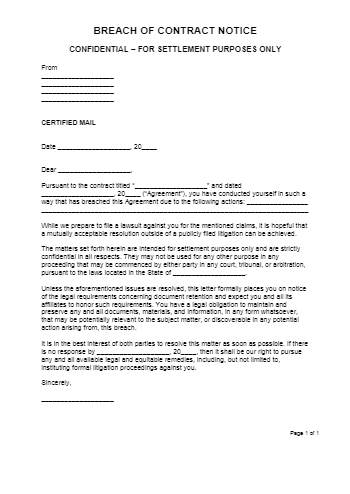 Demand Letter for Breach of Contract

Here's What You'll Find in the Demand Letter for Breach of Contract:
Use template

Has someone broken an agreement with you? Legal experts recommend writing demand letters for breach of contract in such cases. Learn all about these letters in our mini-guide. We include a free template at the end that lets you write an appropriate letter.

What Is a Demand Letter for Breach of Contract?

A demand letter for breach of contract – also referred to as a “notice of breach” – is a formal document that notifies the recipient of the following:

Like demand letters, the breach for contract demand letters makes a specific demand from the other party. This demand is based on the nature of the agreement and state laws. The recipient is given a due date by which they can meet the demand.

When and Why Do You Write a Breach of Contract Demand Letter?

You may or may not be legally obligated to write a breach of contract demand letter. Here’s why you need one anyway:

Warning – Make Sure You Are in the Clear

Contracts usually have a notice clause. These notice clauses dictate how you have to communicate the breach – by letter, email, or fax – and when. If the procedure isn’t followed, your letter may not be considered an official notice.

It’s also a good idea to ensure you’ve held up your end of the agreement and you can prove the other party has broken theirs. Note that you have a few years after the breach has occurred to take the other party to court.

What Is Included in a Demand Letter for Breach of Contract?

Here are the essential details to include in the demand letter for breach of contract:

Tips When Writing a Demand Letter for Breach of Contract

No one wants to go to court over a contract breach. A notice of breach puts pressure on the other party and could help you save time and money. Use the template provided below to write an appropriate demand letter for breach of contract.

CocoSign provides free templates and other helpful resources for a variety of legal and formal situations.