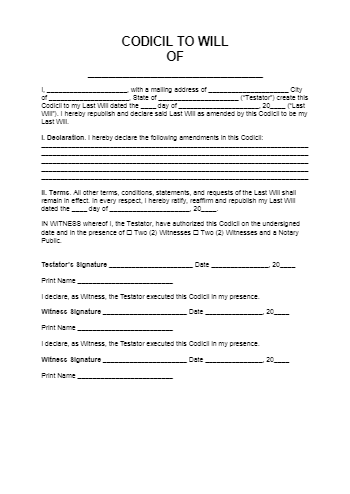 Here's What You'll Find in Codicil Form:
Use template

Signing and executing a will under the provisions of the law is sometimes not the final straw in the lifecycle of a will. The testator might need to make one or two changes on his or her will, including adding another beneficiary to the existing list. The most convenient way of effecting this change is using a codicil form.

Codicil forms are usually used when only few changes are to be made. Otherwise, the testator should consider writing a new will. This article explains a lot more about a codicil form, its contents, and the consequences of not using one.

What is a Codicil to Will?

A codicil to will is a legal instrument used to modify, add or revoke part or the entirety of the will. Used to make alterations to a last will, it must be signed and executed in like manner as a will depending on the state laws in which it was created. The witnesses to a codicil should not have been mentioned in the will. The codicil to will can also be executed with a self-proving affidavit.

When used to modify part of a will, it affects only the section for which it was created and will leave the other provisions or sections unchanged. A will may be modified by one or more codicils. However, the more the number is, the more difficult it is to keep track of what has been changed from the original document. Each will should make reference to the original will and all other preceding codicils.

Sometimes, when too many changes are made to a will or when these changes are rather drastic, the court may get involved to monitor the handling of the properties, especially when the subject is an estate. A codicil to a will should be kept together with the will it is modifying.

What Is Included in a Codicil to Will?

There are some elements that must be present in every codicil template or form. They include a title, opening paragraph, changes to be made, signatures and statements of the person making the codicil.

It should highlight that the testator is of sound mind and wishes to make modifications to the original will, effective from a particular date.

Changes to be made

It should clearly highlight what segment of the will it is changing.

After stating the changes to be made, the codicil should end with a clause like this:

In all other respects I reaffirm and republish my Last Will and Testament dated {insert the date of the will}.”

There are also spaces for the testator, witnesses to the codicil and the notary public to sign and fill in the date they become effective.

When Do I Need a Codicil to Will?

Codicil to wills are typically used when:

Consequences of Not Using a Codicil to Will?

The following are some of the consequences of not using a codicil to will:

When should I consider writing a new will?

If you need to make a lot of amendments to your existing will, it is best you write a new will. In general, you should consider writing a new will, if:

Who is eligible to make modifications to a will?

Only the testator who wrote the original will is legally permitted to make modifications to their last will and testament. So, once they die, changes can no longer be made to the will. It is not within the rights of an individual with a power of attorney to make changes to their principal’s will.

How do I write a codicil to a will?

In writing a codicil, you have to clearly write your name, residence and the date you signed your original last will and testament. Following this, you should list out the amendments you wish to make and what clauses you have to modify.

Do codicils have to be notarized?

This depends on the requirements of the state in which it was created. However, traditionally, they do not have to be notarized. Yet the signing of the testator must be witnessed. The number of required witnesses may differ from state, but it is usually not fewer than two.

Testators can sign this affidavit at the same time as their codicil or at a later date if they so desire.

If you are looking for a free codicil form, look no further than here. CocoSign has several codicil forms and templates in stock for you. Most importantly, you can download them and other various templates for free.