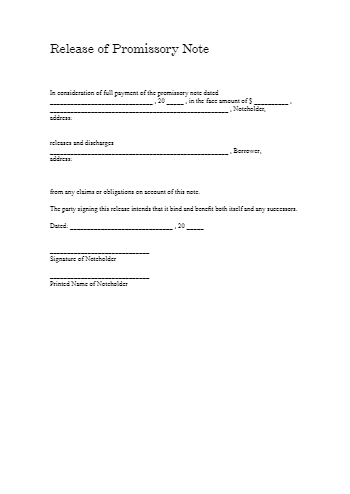 Here's What You'll Find in the Release of Promissory Note:
Download template Use template

The end of any contract is as significant as its beginning. Similar is the case with a promissory note. Once the loan has been paid off within an agreed-upon timeframe, it is now the time to wrap up loose ends while releasing both lender and borrower from their legal duties.

If you want to know what a release of promissory note is, why it is needed, and what important information it includes, continue reading this post.

What Is a Release of Promissory Note?

The release of promissory note refers to a document which serves as the proof that the borrower has made loan repayment. In other words, a release can be defined as the end of commitment between parties under a promissory note.

Well-drafted promissory note release helps lenders and borrowers prevent future complications and conflicts. Of note, no document can protect you from later court claims and lawsuits.

You can strengthen your defense with a clear release of a promissory note in case any lawsuit or claim arises. Once the loan is satisfied, the borrower is given a receipt as evidence.

The loan release form is signed by the lender and handed over to the borrower that is later attached to an original promissory note for personal records. After the lender signs the release form, the borrower is now discharged from all liabilities and obligations.

Of note, the release of promissory does not require any witness at the time of the lender signing loan release form.

When and Why a Release of Promissory Note Is Needed?

As mentioned earlier, the promissory note release is used after a borrower has paid off his/her debt. Both parties are relieved of any liabilities and obligations under this note once the loan has been reimbursed in full.

Furthermore, the loan owed to the lender on the original promissory note can be paid off, or the lender may also forgive the debt if it is not reimbursed in full. It is to note here that in either case, the release of the promissory note will be needed to be signed by the lender.

On the whole, promissory note release acts as a legal document that protects both parties from legal issues that might emerge in the future relating to loan repayment.

What Information Included in a Release of Promissory Note?

The promissory note release is quite a simple document or a receipt that the borrower receives informing that their money loaned including interest (if any) has been fulfilled. It includes quite a few important elements, such as:

It is worth mentioning that there is no need for the presence of any notary or witness when signing the release note. Moreover, it is advised to distribute the signed copies of the release note form to both parties.

Now that you know the significance of the release of a promissory note after the successful end of the agreement, make sure both parties sign the release form. It will help you avoid future legal issues.