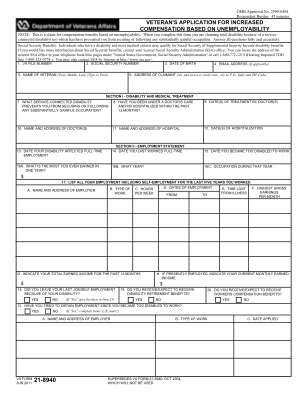 benefits for refusing to provide his or her SSN unless the disclosure of the SSN is required by a Federal Statute of law in effect prior to January 1, 1975, and still in effectoccupation and that the statements in this application are true and complete to the best of my knowledge and belief I understand that these statements will be considered inSocial Security Benefits: Individuals who have a disability and meet medical criteria may qualify for Social Security of Supplemental Security Income disability benefitscollection of money owed to the United States, litigation in which the United States is a party or has an interest, the administration of VA programs and delivery of VA

Utilize CocoSign's riches of templates and custom-make your own Va Form 21 8940 2011 2018 as the guideline below indicates, trimming turnaround time considerably and streamlining your workflow like no other.

Hey veterans out there, Travis Studdard back.with another video following up on a recent.one I just did on the situation that occurs.sometimes to veterans when they apply for.an increase on a particular disability and.then in response to that, VA sends back a.VA form 21-8940, and again, that form is part.of what is required for an application for.TDIU, or individual unemployability benefits..If you received one of these forms, I explained.in a prior video why you may have received.it, but now I want to answer the question.of, \"Okay, so now I've gotten this form from.VA, what do I do with it and when do I have.to do something with it?\".First off, you need to respond and submit.the information asked on that form within.30 days of VA sending it to you..If you don't do that, if you don't do it during.that time, then VA's own rules say that they.will administratively deny your claim for.TDIU..So again, it doesn't matter what sort of evidence.you likely have of unemployability, if they.send you that form and you don't complete.it and don't send it back to them, then you're.going to receive a denial on TDIU benefits..Now in that situation, that doesn't mean your.whole claim has gone down the tank..The other claims that you made for increased.ratings should still be considered by VA,.so again, if you're seeking an increase from.50 to 70 on your PTSD, they're not going to.adjudicate your TDIU without the 8940 form;.however, they will still consider whether.your PTSD has increased in severity and should.be evaluated at perhaps 70 or even 100% scheduler..So, if you get it and you think that you are.potentially eligible for unemployability benefits,.which again, if you're working full-time and.making good money, then chances are you're.not going to qualify..It would have to be a very limited exception,.which I cover in some other videos I've already.done, but if you're not working, if you think.you would like to file for unemployability,.then VA has sort of done you a favor, even.though it is required by them to do this in.certain situations, by sending you this form..So fill it out, get it back to them within.the 30 days, and then your application is.substantially complete for TDIU and they will.issue a decision..If you get a denial or if you have questions.anywhere in that process, again, reach out.to us, our website, winyourvetclaim.com, and.we can see what we might be able to do..Again, this is sort of unusual where VA is.sort of asking you to apply for a benefit,.but it does happen, and that's how you need.to proceed with it, so I hope that helps,.and again, check out our other videos..

You must be drawn to a multifaceted solution to electronic signatures for Va Form 21 8940 2011 2018 . CocoSign will provide you with what you have been Searching for, a single online application that does not need any more installation.

You just need to have a satisfactory internet connection and your preferred appliance to utilize. Follow this steps to e-sign Va Form 21 8940 2011 2018 easily:

That's it. You will be done signing your Va Form 21 8940 2011 2018 on your phones within minutes. With CocoSign's remote signature software, you no longer need to worry about the security of your electronic signatures and use our application of your choice.

In recent, Android gadgets are popular used. Therefore, to make convenience to its customers, CocoSign has developed the application for Android users. You can use the following steps to e-sign your Va Form 21 8940 2011 2018 from Android: