The Presidency VS The Cost: A Revelatory Glide to the Campaign Costs of U.S. Presidential Elections [140 Years Timeline]

It is often said that those who desire glory must pay the ultimate price - Gold. This statement has found real expression in the U.S. elections. For most people, the U.S. election ordeal is simply a bloodless contest that unveils the most competent, reliable, and transparent candidate to rule the country at the end of the day. However, there is a lot more to it than meets the eye. It is also a fierce rumble of cash, bills, and budget.

Generally, political rallies and campaign trails may not appear intricately expensive at first look. But one more careful analysis of the logistics, fliers, glittering platforms, and human resources may reveal an unbelievable compounding of dollars.

Interestingly, this cash splurge has metamorphosed into a national culture, and a concealed prerequisite for presidential aspirants. For over 140 years, this has been the trend. Contestants after contestants have all been at the frontline of electoral expenses. To some, it ended in victory; yet to others, it ended in a tale of despondence.

Like the distinguished Naval officer and politician Jesse M Unruh once said, "Money is the mother's milk of politics." While this statement was met with massive resentment and disapproval, its reality has come to play; as much more than ever, the cost of campaigns and rallies has seen an exponential increase.

According to the political action committee (PAC), the money spent by candidates on electoral campaigns has quadrupled between 2000-2012. Also, a report by the Times. com revealed that the amount spent on campaign trails surged up to 555% between 1980-2020, far greater than the domestic budget for college tuition and healthcare.[1] 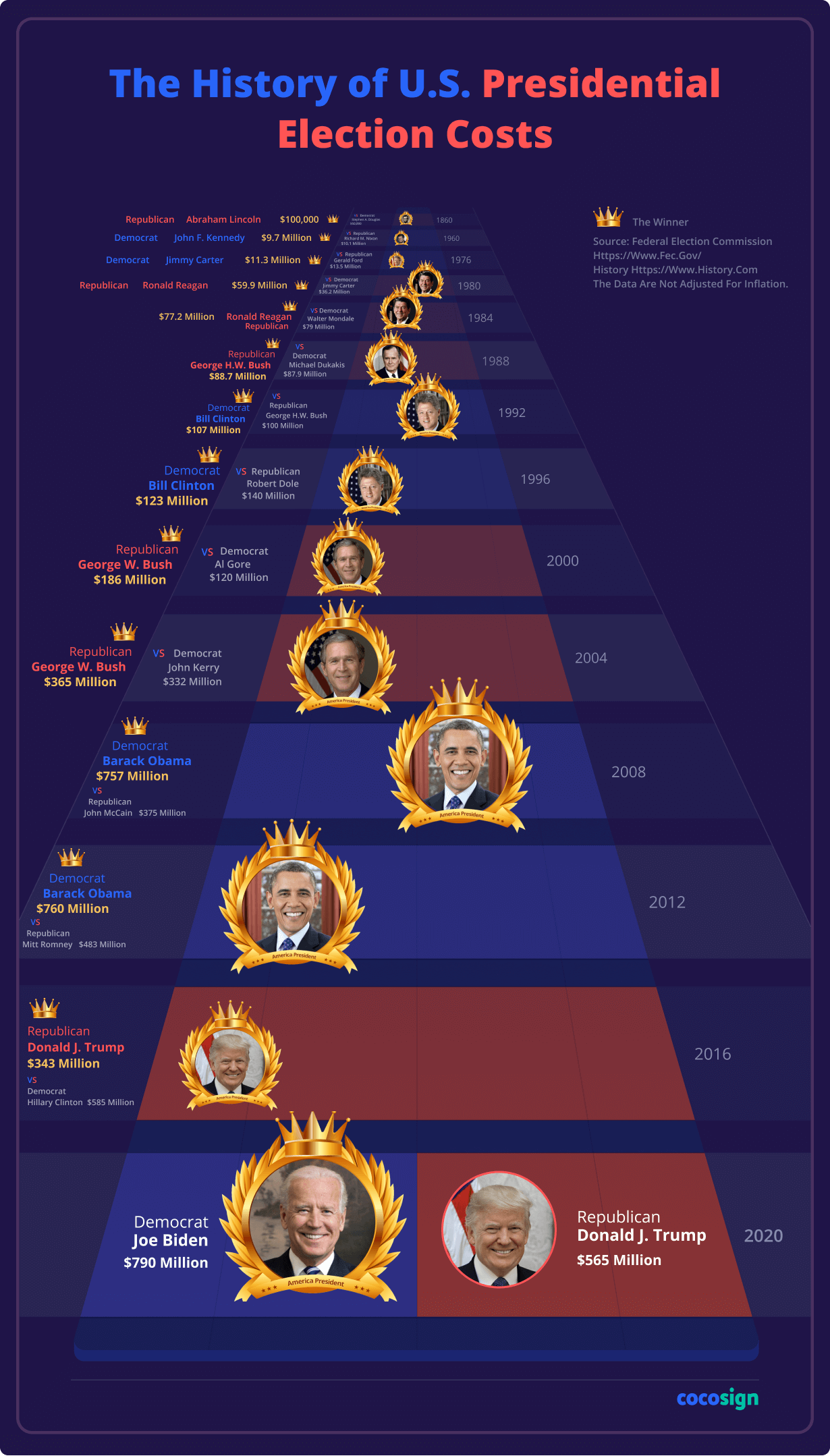 Statistics show that the combined spending of both Republican and Democratic candidates, Abraham Lincoln, and Stephen Douglas, was no more than $200,000. Yet one hundred forty-eight years after, the combined expenses of both John Mcain (Republicans) and Obama (Democrats) exceeded the $1 billion mark.[2] In 2016, the total cost for both presidential and Congressional elections amounted to $2.4 billion.

This exponential increase is driven by many factors, from basic economics to the rise in inflation rates. However, the world has shifted from where it used to be in the mid-'80s and has dramatically evolved.

A new set of factors are now involved in modern-day politics such as media, digital ads, airfare, increased population, and much more than ever; an increased level of polarisation within the public, which automatically makes it difficult to sway them. Careful integration of these new players, regardless of the cost, is extensively paramount for contestants.

Exploring the Factors Surrounding the Unprecedented Surge in Campaign Cost

There is no smoke without a fire. The same is the case with increased campaign costs. Indeed, there are root causes of the increase, which did not grow overnight but was steadily increasing. Below we try to philosophize and pinpoint the sharp factors that have led to this increase, drawing verifiable facts from history and rigorous study.

Inflation and Rapid Rise in Price

This implies that the cost of transportation, rentals, etc. has increased. This has undoubtedly affected the entirety of campaigns in the U.S. as contestants now have to pay higher than what it used to be. With experts forecasting a further increase in the inflation rate as the years go by, it is no surprise that the campaign cost will keep on rising.

Obama's campaign crusade in 2008 marked a new era in the electioneering process, the beginning of the technological revolution in mainstream politics. This whole new scheme will set the pace for what will become a new normal for an effective campaign.

As of 2006- 2007, the tech world was at a cradle stage, and essential inventions were still at incubation stages, such as Android phones and iPhones—social media platforms that will become a powerful tool for campaigns. And in the spring of 2008, these inventions invaded the market and changed people's way of life.

Ever since then, the campaign strategy changed, and automatically the main requirement needed to suit this transition is - MONEY. Millions of dollars were channeled to hire smart programmers, engineers, and technologists. As uncovered by Bloomberg, Hilary and Trump spent a combined sum of $75 million on Facebook Ads, and these numbers are expected to rise exponentially.

America, by far, is the largest democracy accounting for 4.25% of the world's population. It has a population base of more than 327 million people and a median age of 38. Due to its largeness and diversity, there is no doubt the cost to pull the crowd and acquire campaign infrastructure would be astronomical.

Not only that, it is a country of multiple races, cultures, and religions. It is, therefore, no surprise that winning the votes would be a herculean task. Unlike a one-way toll, contestants have to devise a way of reaching out to these people in their customs, favorites, and languages, whether it's English, Spanish, or something else. This requires logistics, expertise, and immerse capital.

In 1960 John F Kennedy defeated Richard Nixon to become the president, and he did so by pulling 70% of the African American votes. While the media rallies this as its headline, it is shocking to realize the massive investments thrown into the black community in a bid to capture their votes.

John F Kennedy came up with a "micro-targeting strategy," where he targeted diverse races, sucking up tremendous energies and resources, of which his campaign team spent more than $9.7 million that year.

Never has the tussle for the presidential seat been more competitive than the present day, unlike the good old days, where only a few contested. Today, these offices are hotly jostled by many.

Some prime examples are, in 1860, not more than five candidates jostled for the Republican ticket, of which Abraham Lincoln emerged the winner. One hundred and sixty years later, that number has exponentially increased as 29 significant candidates declared interest in the White House race under the Democratic party platform.

While the idea that the competition in politics has helped in bringing the best candidate is hotly debated; however, one thing is sure, money remains the lead factor driving this competition. Automatically the various candidates must raise enormous funds for campaigns, and sometimes the higher the funds, the greater your chances of winning the ticket.

It is crystal clear to the blind that American society is more polarised than ever, unlike in the past when candidates grace the stage and canvass for votes from open-minded citizens. Today even before the declaration of candidacy, most Americans have decided which party to support.

Therefore, candidates have to pass the message across and find a way to rewire their already made notions. This leads to more rallies, community programs, and networking, which saps millions of dollars. The present-day politics has seen more campaign events from both parties than it was in the time past.

Fuelling the Campaign: A Brief Overview of Presidents and Their Spending Spree

Do you know that Biden and Trump's combined campaign cost ($3 billion) has exceeded the total value of Subafrican exports in 2018 ($285 million)? The whooping splash of cash on advertisements, rallies, digital ads, airfare, telecom services, etc. is becoming a new normal in the U.S.

The McCutcheon Vs. Federal Election commission (FEC) was the single most significant campaign-Finance case that paved the way for boundless limitation on campaign spending. This breakthrough case carved the path for spending spree among contestants.

Below is a brief overview, unveiling the campaign spendings of the presidents.

Gauging The Campaign Spending Effects; The Biggest Spenders and The Results.

Fundraising and big spending are the order of the day in modern campaigns and electioneering. Sometimes it goes down well as the biggest spenders emerge victorious, but on days the reverse takes prominence.

Below is brief data unveiling the biggest spenders and their fates at election night. 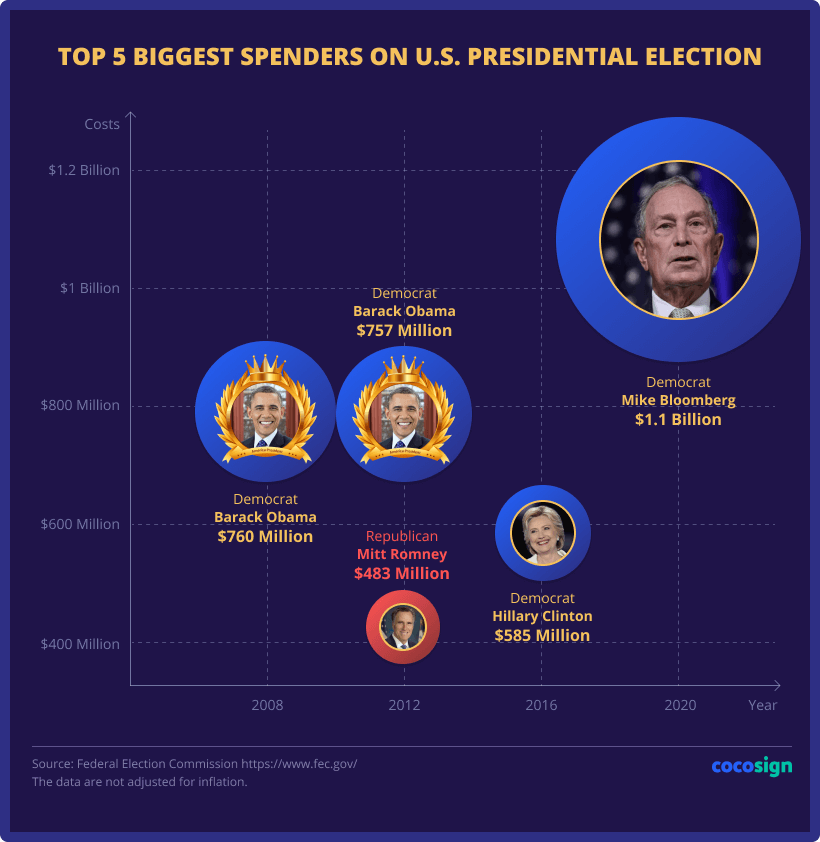 In the spring of 2012, the world watched as an American businessman, Mitt Romney, declared his bid for the White House. He ended up winning the Republican ticket, and one thing was sure - huge campaign spending. At the end of the election ordeal, Romney's campaign team spent $483 million. Reports revealed that social media ads, T.V. ads, and community outreach accounted for these expenses.

The fundraising team was able to gain support from independent donors such as Irwin Jacobs, Sheldon Adelson, Bob j. Perry, who donated $2.2 million, $30 million, $15 million respectively. Sadly he lost the election for failure to bag both the Latino and African American voters.

In what was known as the fiercest election, Democratic candidate Hilary Clinton was on the frontline of yet another expensive campaign. In 2015 the Hillary Clinton's Vision Fund spent over $6.4 million on campaign activities. Other corporate donors such as George Soros foundation, Laurel Foundation, and Political action committee (PAC's) threw in $10 million, $5 million, and $300 million, respectively.

In all, her campaign team spent $585 million. Yet unfortunately, she lost the 2016 election as the enormous funds were not enough to win the electoral college votes.

One candidate that enjoyed good dividends for his money was Barack Obama. Obama's election team took the campaign to another level by investing in social media ads. According to Forbes, Obama spent 10% of his media budget on digital advertisements.

In 2008, his total campaign expenses summed up to $757 million, and on his re-election in 2012, his team spent a whopping sum of $760 million, with a good percentage coming from independent and corporate donors such as the University of California, Microsoft Corp, James Simmons who donated $1.3 million, $815, 000, $7.5 million respectively. The money counted this time, as he was successfully elected in 2008 and re-elected in 2012.

In 2020, the sixteenth richest man in the world, Micheal Bloomberg, declared his candidacy under the Democratic party. A massive splash of cash followed this open declaration. According to the New York Times, Bloomberg spent 70% of his campaign budget on advertisements. He also hosted his campaign team in a superior suite, sponsored their feeding, and funded their work operations.

Fundraising and donations were not Bloomberg's thing, as he alone was the sole sponsor of his campaign. In March 2020, Bloomberg stepped down in the primaries. Till date, he is the highest spender in the U.S. election's history, having spent $1 billion.[4]

The Next Big Thing

It is glaring that money is required for the modern-day election. However, there is still more to it. Management, organization, and communication are other telling factors. Modern-day aspirants must carefully integrate these elements if they want to stand a chance of becoming president.

However, the scribes are no alien to this either. Spend big!