The utility of electronic signatures has become increasingly evident during the last years, and many companies began to use them for convenience reasons.

Electronically signing documents means wasting less paper, avoiding traveling or meeting face to face when it’s not absolutely necessary, and not needing huge spaces to deposit all the paperwork. Basically, it means conducting your business faster and more efficiently.

The COVID-19 pandemic has underlined the utility of electronically signing documents even more. Wet signatures were no longer a reliable option. With the majority of people working from home, and most offices being closed, the electronic signature became an essential tool.

The Legality of Electronic Signature in the World

The utility of electronic signatures is beyond any doubt. The only issue that remains is connected to their legality. This is particularly important when it comes to international business relations, as not all countries have the same legal provisions and open view on electronically signing documents.

While some states have given electronic signatures the same status as wet signatures, others have imposed certain restrictions. Some states haven’t assigned any legal value to them at all.

There are two models, dividing the states that allow the use of digital signatures in two major categories:

The Countries With an Open Legal Model

These are the countries where the use of electronic signatures is unrestricted, and authorities don’t impose any particular requirements. In these states, electronically signed documents can be used in court without any problem. Users don’t have to provide any additional proof regarding the legality of the document.

The Countries With a Tiered Legal Model

These are the majority, in fact, countries that recognize the Qualified Electronic Signature (QES). The QES, or its local equivalent, is the type of electronic signature that follows EU regulations and is considered authentic and admissible in court.

This is the electronic signature that offers the highest level of safety, and it’s considered to be completely reliable. The European Union is one of the main economic decisive factors, and when it comes to electronic signatures, they have their standards.

It’s the EU Regulation No 910/2014 (eIDAS regulation) that imposes that standard, and the Qualified Electronic Signature completely fulfills it. The advantage is that you can check and verify the authenticity of an electronically signed document long after the moment it has been created.

The legality of electronic signatures is an issue that most states consider, and things are slowly changing all over the world.

Considering the problematic situation all economies are going through with the COVID-19 pandemic, many states are bound to reconsider the restrictions to ensure the necessary flow of the economy.

But at this point, these are the categories of countries, based on their acceptance of electronic signatures:

The Legality of Electronic Signature on the World’s Map

To better illustrate the way the electronic signature is used all over the world, let’s look at some clear examples of countries from each section mentioned above, as well as the local restrictions they impose.

Countries where electronic signatures have the same legal status as written signatures:

Countries where the status of the electronic signature is unclear or where digital signatures are strongly preferred:

Countries where electronic signatures are enforceable but don't have the same status as a written signature:

Countries where electronic signature is not available:

This category is a bit unusual. Most of these countries have issued acts to recognize electronic signatures, but either don’t have a specific data and law to state they are legally valid or simply don’t use them in practice yet. Some examples are:

Note: Each category only lists some representative countries. Hence, it is not a completed list for all of the countries in the world.

The Legality of Electronic Signature in the EU

Electronic signatures have caused mixed reactions in general, so it has been up to authorities to issue clear laws and regulations that could increase the public’s trust and interest in this relatively new tool.

The European Union has played an incredibly important part, as it influenced the reaction in many countries. An essential step was the European Union Regulation No 910/2014, also known as the Electronic Identification and Trust Services for Electronic Transactions (eIDAS).

The goal of this regulation was to open up the European market to electronic transactions by setting the standards.

The Legality of Electronic Signature in the US

It’s true that in many cases, people still have their concerns with the legality and efficiency of e-signatures, but those will be overcome shortly. The COVID-19 pandemic has turned this tool into an essential one, so many businesses are now reconsidering their reluctance. 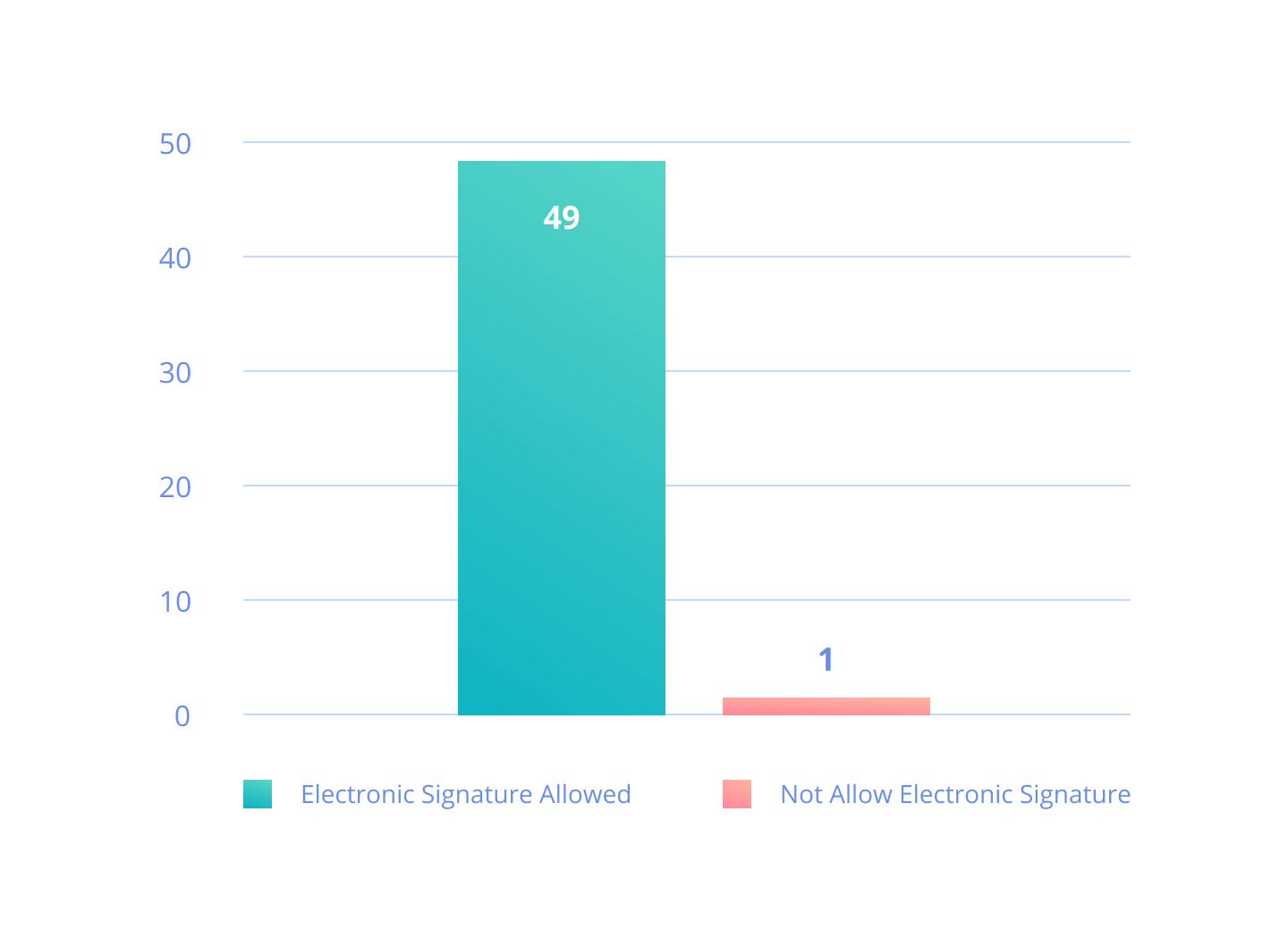 The Advantages of Electronic Signatures

One of the main advantages of signing documents online is that it saves a lot of time. Instead of printing a document, signing it, and then mailing through your email client or handing it to your partner, you can do everything in a few minutes, without leaving your device.

Spending less time signing and sending a document, and avoiding unnecessary meetings or departures, means you can use your time more efficiently and focus on other tasks that are waiting. The productivity of the staff will be increased.

Companies can reduce their expenses if people are working remotely. There is no need for renting office space, for example. In some fields, that is possible for the majority of the staff, which means the profit of the company will be much higher.

Electronic signatures are safe, fast, legally binding, and you can easily prove their authenticity, maybe even easier than with physical signatures. Employees can benefit from using e-signatures, as it makes their job easier.

It can also be a bonus in the eyes of the customer. Speed and efficiency, as well as a professional-looking document that is delivered in an updated way, can make a real difference.

The Use Cases of Electronic Signatures in Business

Electronically signing documents can help your business in more ways than you probably imagine. It’s an extremely versatile tool that can be applied to many types of important documents you use frequently. These are the most common uses of electronic signatures in business:

Electronic signatures are connecting the business world on a new level. It’s an essential tool that makes business relations much more accessible and many processes that used to take a long time can be done in minutes. If you use an electronic signature, your business will be more profitable, as you will be saving time, money, and your employees will be more relaxed because their job will be significantly easier.

You can organize all aspects of your business and communicate in real-time about the changes you want to implement. Electronic signatures help speed up and improve your workflow and spend less time worrying about paperwork and more on expanding your client base.